No fireworks, then.
There was in fact another and more competitive event ongoing in Florence while I was there! 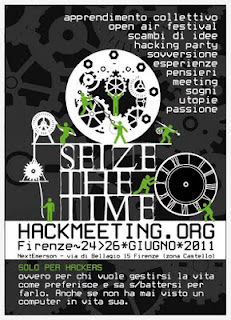 I'm talking about HACKMEETING, the gathering of the Italian hacker community - this year held in CSA Next-Emerson. Three days to discuss digital capitalism, creative commons, bitcoin, cloud computing, robotics, open source and much more.
Among the most interesting talks and workshops, the one by the guru Richard Stallmann about software freedom; the one by Carlo Formenti, about the social consequences of digital capitalism - and especially on workers; the one by the Spanish Indignados, who presented their alternative social network n-1 y Lorea.
But that's nothing, that's what the newspapers has covered.
The phenomenon goes far beyond. What totally moved me was the community itself. I mean, this people is meeting every year from 1998 in a different Italian city. The event is completely self managed - by the community itself - and open to everyone interested, free of charge. It's not that common.
Generally there is also some sort of institutional support behind this stuff.
Those guys are fantastic and their ties incredibly strong - strong of the strength you gain when there is nothing to question about it.
I can't tell you more, since it is not my world, though their work and the way they are together...well, that's definitely inspiring.
Posted by elettrarossa at 07:17