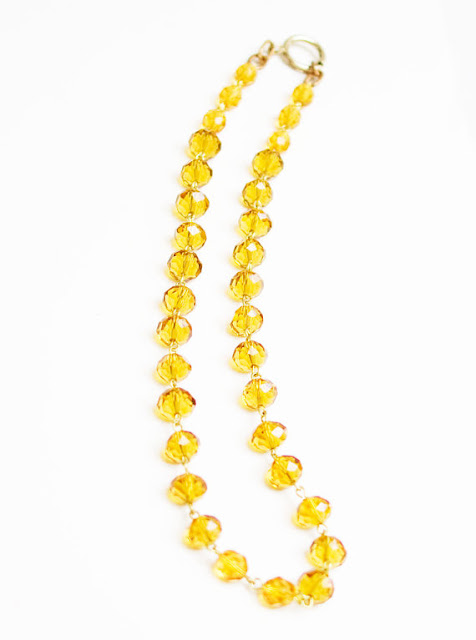 Retro Chic Link Chain
Basically a opera length necklace made out of pure light, perfect for your tan! 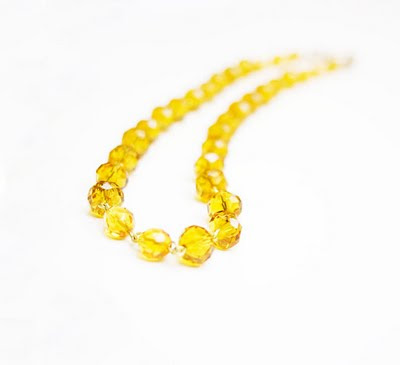 Retro Chic Link Chain
Technically, the Retro Link Chain Necklace is one of my classy beaded link chain made out of brass and faceted topaz crystal, some round (8 mm) and some slightly oval (10mm).
The chain is approximately 50 cm long (19.7 inches), and it's closed up by a round, brass lacquered metal clasp.This necklace is still the outcome of a 1940's inspired, laborious work.
As a result, the shining topaz crystals seem actually to float.
If you'd like to find out more informations and photos about my retro chic link chains, please just give a look at
http://elettrarossa.blogspot.com/2011/03/long-beaded-link-chain-necklaces.html
Posted by elettrarossa at 12:42 No comments:

"Christmas in July" it's an informal event on Etsy which helps online sellers to be competitive with seasonal sales. 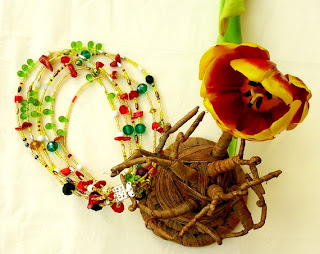 It seems in fact it's not easy to sell anything during summertime, so Etsy shops come out with incredible promotions, as far as I could see from a fair 10% up to the crazy 40%. 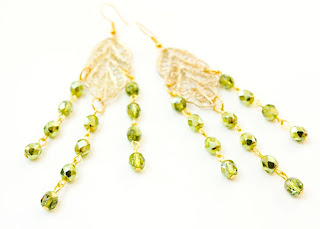 Filigree Earrings and Green Crystals
So, technically, this is the right moment to do some shopping on line.

My shop and I decided for a 20% discount on all items, while it stays active the 10% off I previously offered.

I think it's the occasion to buy what you've always wanted but considered too expansive.

Have a nice day surfing the web!
Posted by elettrarossa at 04:54 No comments:

Report from the Exchange Art+Craft Market

On July 9, a friend of mine and I went to the Exchange Dublin Art+Craft Market for our very first time. We brought his street art paintings and my jewelry.


It has been a long day, since we'd never had an actual market-day beforehand.
We had a lot of fun though!
Incredibly, we also manage to sell something...Well, not that much...but I now owe a beer to him.


At the beginning there was very few people, although outside was taking place the food market. Fortunately, the early boredom was soon compensated by many friends who managed to drop by...Thank you, guys!

The environment was cozy, very informal, open and free under many aspects.

Entering the room, you'd have met the Jeweler and the Artist chatting and drinking tea on the sofa. Then you'd have browsed the stall of the Girl who sells Conserves and Drawings and the stall of the Two Women, who were offering super-cute newborn shoes, hats, ponchos.

These two stalls were both under a wall decorated with pictures of the Exchange crew and the visual effect was great.

Eventually, against two huge windows, you'd have seen Red Hair carving her croquet hooks, My Friend and I having fun with the camera, and a Couple of Girls with their totally crazy stuff - from the book covers made out of Reader Digest issues to the cool jewels made out of vintage items.

Later in the afternoon, two Other Girls joined the market - they sold books.

I was feeling too shy for asking their names. As a newbie, I thought they all perfectly know each others - and that makes me more shy than ever. But in the end, chatting briefly with one of the Couple of Girls, I was surprised to find out it was their very first time as well.

I probably misunderstood the entire situation, as usual!

It was definitely a good experience!

Stay tuned
Posted by elettrarossa at 04:26 No comments: 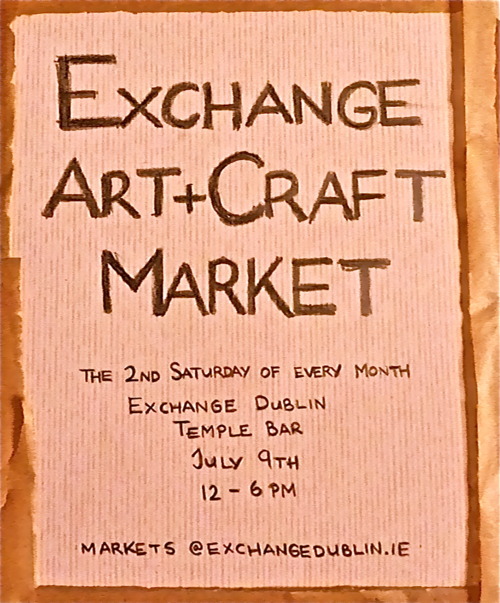 Posted by elettrarossa at 01:33 No comments:

Dublin city. Summertime. Almost a year has being passed from the moment I saw them and decided to buy them. 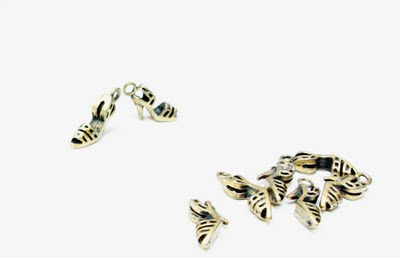 Stiletto Heel Charms
I made out of those funny, nice and completely useless (cute=useless) supplies my charm bracelets and earrings.
But I think things have to change a little - at least once in a year! - and therefore I'm now selling them for the same prices I got as a crafter. 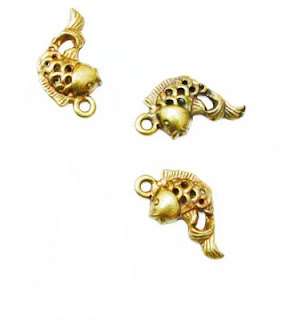 Fish Charms
I've never sold supplies, so I don't know exactly the online market prices and quantities for this stuff. I've just compared them to the ones in the other Etsy shops. Eventually, I think the price/quantity rationale I wrote down listing them is quite cheap and balanced. Give me a shout if I'm wrong. 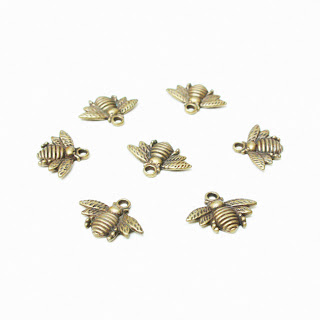 Bee Charms
Unfortunately, the postage costs are more expansive than the items themselves, but I've tried to leave the total balance within the range I was telling you about above. 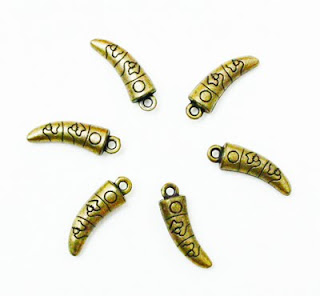 Italian Lucky Horn Charm
So, what can I say in occasion of such an important anniversary? 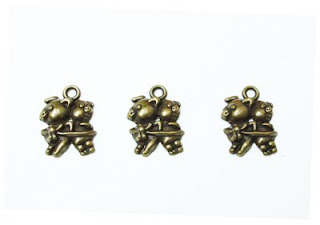 Piggies Charms
After almost a year back to costume jewelry, mostly as a hobby and mostly on line, I've often heard that costume jewelry is out, dead, unsellable. 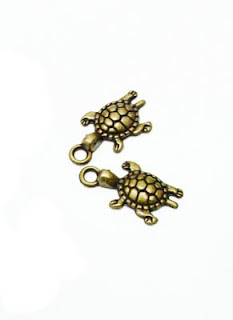 Wise Turtle Charms
This cruel sentence has also been the reason why sometimes markets refuse to rent me a stall, since it seems they are overwhelmed by obsessive jewelers who want to sell their handmade, unique products despite of common sense. As me, by the way. 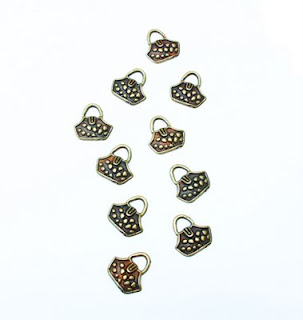 Tote Bag Charms
This gray attitude against jewelry makes me only more happy of any sale, of course. There's more satisfaction in selling unsellable stuff than fancy stuff everybody wants, don't you think?!
Posted by elettrarossa at 13:51 No comments: 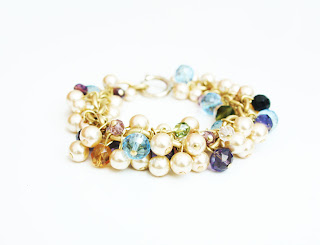 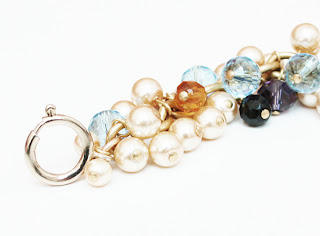 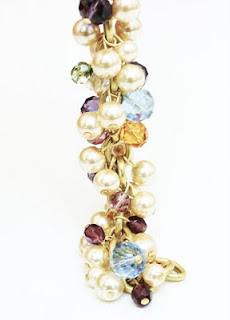 A bead cascade!
What you see above is a statement chain bracelet decorated with ivory crystal pearls and embellished by round faceted indigo, purple, topaz and olive green crystals slightly different in size (6, 8, 10 mm diameter).

Another ode to a calm excess, this beautiful bracelet is a unique Italian fashion jewel and it is thought to be definitely visible.

My handmade charm bracelets are made out of a smooth oval brass chain and flat headpins. They have a elegant round clasp, of a brass lacquered ultralight metal.
Each bracelet is approximately 22 cm long (8.7 inches), but I can make it shorter or longer upon request.

This kind of jewelry is not for shy people!
Posted by elettrarossa at 08:39 No comments: