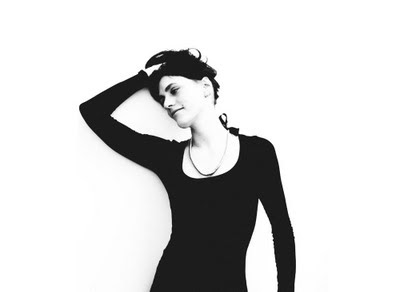 Steel and Bow Necklace (SOLD)
Posted by elettrarossa at 10:36 No comments:

It is called "The Fertility Tree" and it is a work of art preserved in Massa Marittima, a little town in Tuscany, Italy.
Dating back to 1265, the fresco illustrates a tree from whose boughs are pending off, as giant fruits, many phalli, very realistically drawn. Waiting for the tree's fruits to fall, a small crowd of women; two of them seem to fight for one of the twenty-five phalli. Last but not least, five black eagles are flying over them. 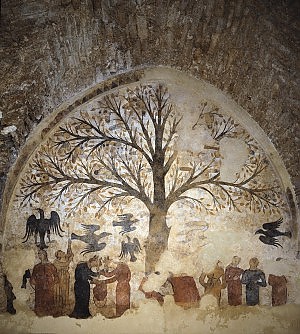 The unusual profane theme is commonly thought to symbolize ancient rituals and local beliefs; besides, the image is painted on the huge wall towering over the Abundance Fountains.

If so, it would be unexpected its survival to Christian iconography. Someone there would have definitely confounded things sacred and profane!


For other historians, in fact, the women'd be witches - and they are not waiting for the phalli to fall but hanging up them, freshly cut off; the eagles'd be instead symbols for the Sacred Roman Empire.
The fresco would be a warning against the possibility of Ghibellini - the emperor party, in medieval Italy - getting the power. And this would have naturally opened the doors of Caos, subverted the rules of society and let the nearby Lunigiana well known witches be governors of our poor lives.
If so, the fresco would be the first political manifesto and a precise accusation of heresy addressed to the Ghibellini by the Guelfi - the Pope party, in medieval Italy.
Although the inauguration is coinciding with the reopening, works are still in progress, since the situation is very delicate and another wall has to be restored.
The peculiar work of art will be newly open to the public from August 7. If you're traveling throughout Italy next weeks, I really recommend you to drop by and then let me know which explanation of the fresco do you think it's correct!

Well, well, well. That's why Italy sometimes freaks me out.

This is an update to the Fertility Tree post. I just want to make sure you're aware of the mysterious case of castration some proud citizens have recently claimed.

Have some crucial elements gone missing? This is what the spoke-man of a group named "Massa Comune", Gabriele Galeotti, stated to the Public Prosecutor Office.
More precisely, it seems there are less testicles than before.

Discovered in 1999, soon hidden for a long restauration, eventually reopened to the public a few days ago, the weird fresco doesn't stop shocking. Or, as you may see, it' summer.

Stay tuned!
Posted by elettrarossa at 09:35 No comments: