I recently developed a passion for gemstones...and so I'm also filling up my etsy shop with necklaces like this 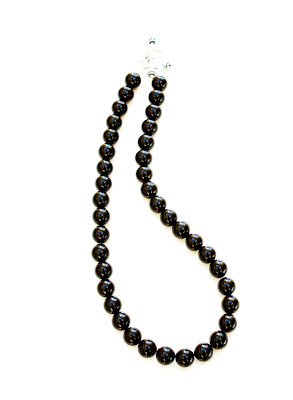 I like black onyx, it's one of the few natural black gemstones (nevertheless it is normally dyed to enhance its color). 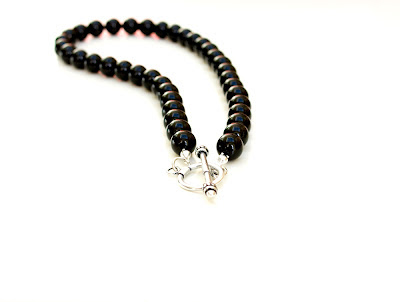 I prefer to make short necklaces, meaning the classic choker, mainly because the 16 inch strand is considered standard in US and Europe as well, so that things are less tricky both for buyers and sellers. Moreover, that measure is perfect for women, but often is also long enough for men. Anyway, better shorter than longer. I can always add a chain to reach the desired length without starting all over again....And my necklaces are always ready to ship! 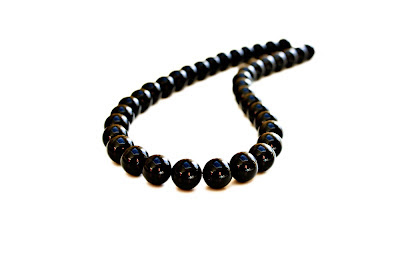 The jewel fastens easily with a lovely silver T bar clasp, a kind of clasp very efficient in gemstone jewelry because it uses the weight of the stones to close up...And weight is not a problem here: my black onyx choker is made out of huge, shining 10 mm round smooth black onyx beads! 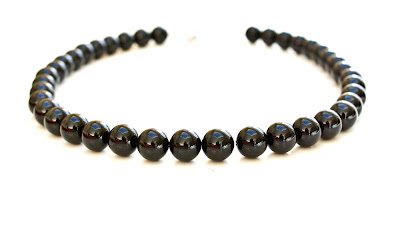 Another thing I love about gemstone jewelry is that behind any of them there is a story, an ancient legend or a curious myth.

For instance, the name "onyx" comes from the Greek word "onux", meaning fingernail. The story is that one day Cupid cut a divine fingernail of Venus while she was sleeping. He left it on the sand, where it was turned into the semiprecious gemstone. If you're wondering why Venus' fingernail was black, let's just say she was not emo. Black onyx came in vogue later, with the Romans. Beforehand, onyx was mostly found in its sandy-brown quality, probably more close to the goddess' skin tone!

At present, black onyx is thought to increase regeneration, happiness, intuition and one's instincts. Onyx retains memory of the physical occurrences surrounding a person. Onyx brings balance to mind or body as well as strength of mind.

The Research for the Battle of Anghiari is over.

...Briefly. Since I've been following the quest for the Battle of Anghiari by Leonardo da Vinci from the beginning, it seems now right and proper to share the last follow up. If you don't know the story, you can read my previous reports here and here (...previously, on Leonardo's!)

...Well, basically, on August 14, National Geographic was to stop the research for the Battle of Anghiari, the lost fresco allegedly hidden behind a wall in the Hall of the Five Hundreds, Florence, Italy. 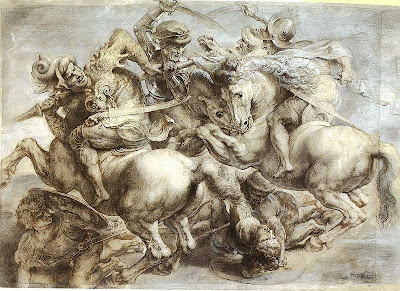 WASHINGTON, DC, USA – National Geographic notes that the research project for the Battle of Anghiari is suspended “until further notice”. It is what we read in a note of the Nat Geo Society that sponsors the research of the hidden fresco by Leonardo Da Vinci [...] While waiting for new developments, the mayor Renzi to communicate that the structure in Palazzo Vecchio must be removed even if National Geographic still “intends to continue the effective and productive relationship with the city of Florence on further cultural projects of importance both to Florence for Italy”.

Below, the talk by Maurizio Saracini at TED Conference (October 2012), a pretty good resume of all the research.

I had two fistfuls of murano beads - one purple, one yellow - which I've bought some time ago. I had thought to use them for making earrings, but I soon found out I'm not good at following plans. I just start beading and go ahead forever. 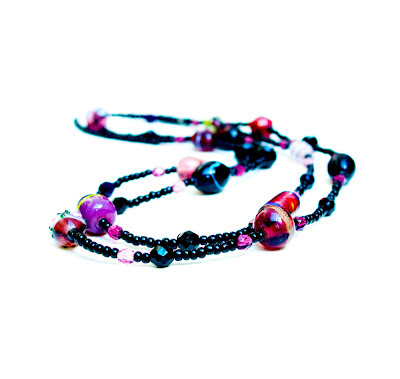 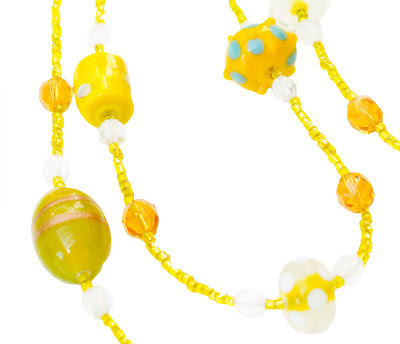 I was pleasantly hypnotized and didn't want to stop working, when I ran out of beads. Fortunately, I remembered I had to repair the necklace of a friend of mine. Perfect timing: alienation day was not over yet! 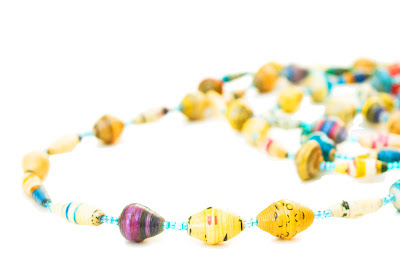 Anyway, at a closer look, I noticed that those beads were made out of rolled paper, held still by transparent tape - or at least it seemed, because then I discovered people mostly use glue, and nail color (SIC).
It's brillant, I think, and so I'd love to share this video-tutorial by Ms. Liz with you...

...What a pleasant surprise! Ludwig Wittgenstein, the philosopher, the genius, the Zeitgeist, travelled tons of times to, and...LIVED in Dublin! I'm so happy with my discovery! On the one hand because when I was a girl I studied his writings - but clearly not enough his life! -, and loved kind of everything he said (I won't discuss that, I promise); on the other, because I really needed to think Dublin was well worth a mass. And fortunately Dublin always surprises me. Its hidden plenitude reveals itself discretely, and in the most curious ways. Especially when you're reaching the dangerous edge of a meaningless boredom. 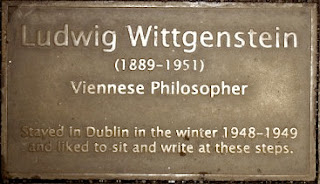 As usual, it happened by chance. A friend of mine came here on holiday. On September 6, we went for a visit to the Botanic Garden, where there are many victorian glass houses she was interested in. The garden is marvelous, by the way. 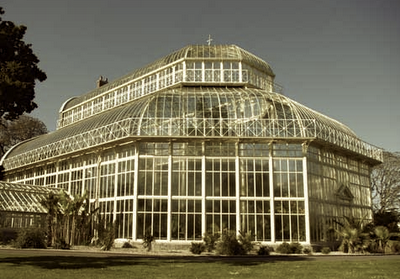 Back home, I googled "wittgenstein+dublin" and found out all the story. In the autumn of 1947 Wittgenstein resigned his Professorship in Cambridge: he needed to retire to prepare the Philosophical Investigations for publication. So he came to Ireland and, after some days spent in former Ross Hotel, Dublin, he lodged at Kilpatrick House (Redcross, county Wicklow) for the entire winter. 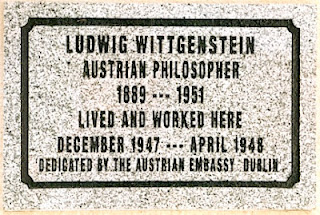 He almost went mad there (well, it wouldn't be news) and possibly drove insane those poor hosts of his too. He told his friend Drury "that he could not work; 'the continual murmur of the people in the room underneath his', talking late at night, was driving him 'crazy'." The plaque above was erected at Kilpatrick House, which Wittgenstein left after Easter 1948. Drury was in fact worried for his health, and offered him to stay at his cottage in Connemara, where "his needs were tended to by a family retainer, Tommy Mulkerrins. Each day, Wittgenstein had him remove and burn large piles of manuscript material." Of course, he was also successful in being hated by the locals. 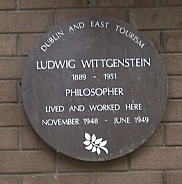 That autumn, after some brief journeys, Wittgenstein came back to Ireland. This time he booked into Ross's Hotel, now the Aisling Hotel, where another plaque (above) was erected to testify his (probably nasty) passage. He was now very close to St. Patrick's Hospital, where Drury was working as psychiatrist, so they met almost daily. During their walks in Phenix Park, they used to discuss philosophy, but obviously "this was not sufficient for Wittgenstein [...] His time in Ireland was drawing to a close. Lured by the promise of intellectual stimulation, he decided to visit Norman Malcolm in America." So Wittgenstein eventually left Ireland on June 1949.

I'm kind of busy these days  - read: overwhelmed - so I'm not updating so often as I'd like.  Fortunately, my crafts always comfort me. Nothing cheers me up more than a northern light shimmer! So poetic... 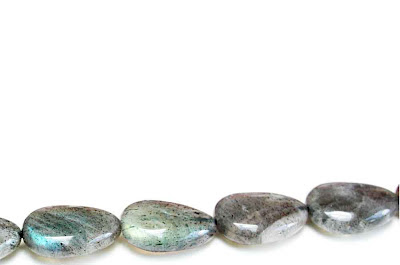 This is one of my latest listings on etsy, a delicate composition of gray drops. See, in the half-shadow of the lab they look like river stones... 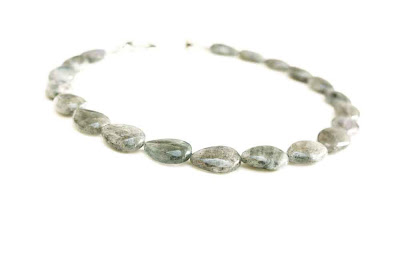 ...but incredibly, they transform themselves in luminous flares as the light shows up in the room.
This precious gemstone is known as Labradorite, but due to the peculiar way it reflects the light, it is also called the "falcon's eye". I find it quite appropriate, it actually has something...wild. 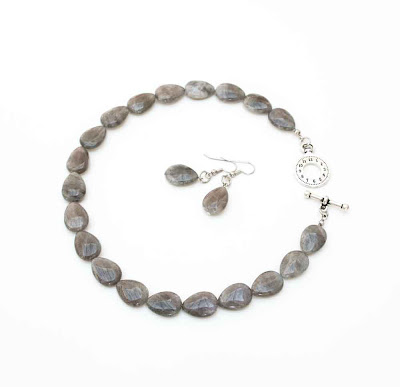