As promised, today I'm going to introduce you to my new jewelry: first of all, the slide bracelets! 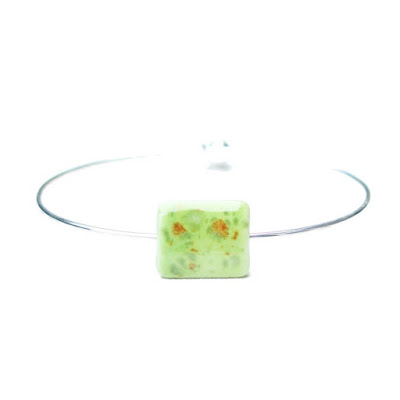 A simple porcelain bead on a silver plated wire. What do you think?!

Basically, I thought to make something cheaper than the usual crystal and gemstone bracelets - everyone loves a little saving, right?! -, but using high quality material. 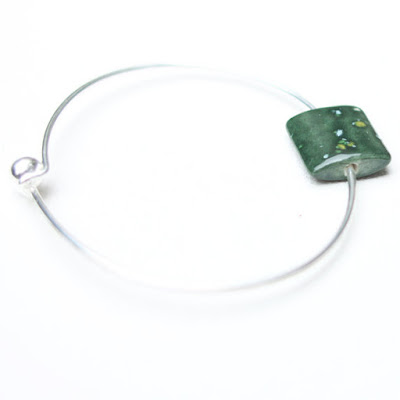 The squared tiles are porcelain, and handmade!

The support is a silver plated brass wire, exceptionally thick for this kind of jewelry. The metal was tempered so it can be bent easily and it always regains its original form! 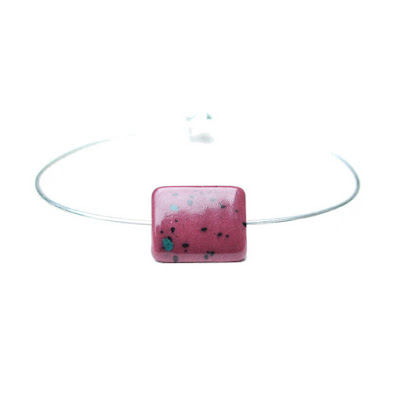 The simple design makes these bracelets a perfect wear for the summer, and, I would add, a great gift idea! 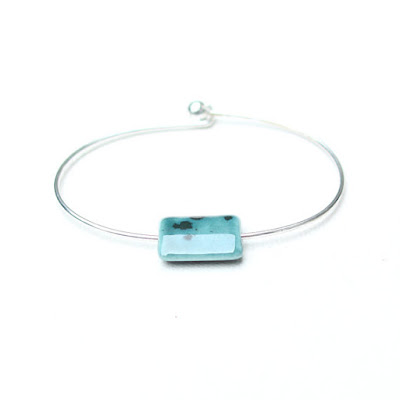 Well, the round bead is the "+ one" I didn't want to leave behind, but it is actually a little different. First it is ceramic, not porcelain. Second, as you can see, the hole is bigger and it actually slides on the wire, while the porcelain tiles are set. 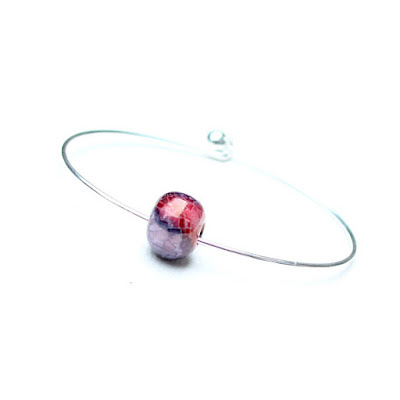 Do you like them? too simple?! Let me know...That's all for now, but I'll be back with more!

Elettra
Posted by elettrarossa at 04:09 3 comments:

I felt I must make some cleaning and refilling before launching the new models. Things are still a bit rough, but hopefully I'll manage to have a larger, funnier shop! I reposted some sold out models changing the gemstones, like the piece below, made of blue chalcedony instead of black pearls.
The color is a nice pastel blue, and it downshifts from solid to transparent towards the ends. 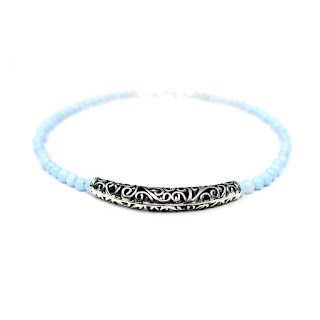 I reloaded the silk headbands section with black, red, olive, and brown! It was not easy to find the silk this year, but it was worth the search! I love these little beauties!

I also restocked two little black chokers (more to come!), that seemed to be targeted by more than one customer. They are both simple and showy: one extra fine, one...massive! 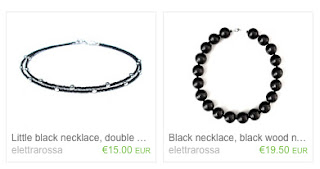 Eventually, here comes again the tiger eye choker. Since many asked a finer version, I now have it in 8mm and 4mm. Unfortunately, 6mm is right now a rarity so I decided to let it go! However, I sincerely prefer the 8mm. It's maybe too much lady-like, but you can appreciate the gemstone shades so much better... 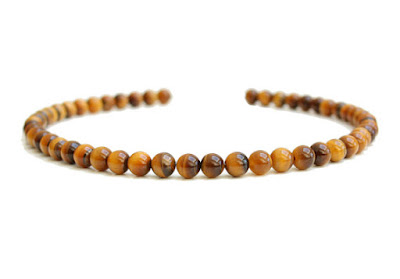 Elettra
Posted by elettrarossa at 06:47 No comments:

What is New and What is No Longer.

Hi everyone, how are you doing?

I just came back from Italy. I retrieved some great supplies for my shop. I'll show you all the great new products next week! In the meantime, I'm sharing some funny impressions I had while in Florence, my hometown.

Needless to say, my prejudice was that in Italy nothing ever changes. Or at least, not really. 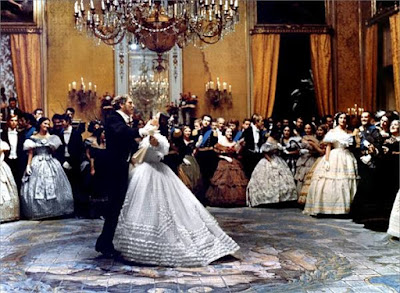 Image from iconic The Leopard (1963), by Luchino Visconti

Going home less and less frequently, I start seeing things differently. This time, I actually felt like I'd been missing a few loops. So, as a emotional detective, I started paying more and more attention to details. I had my heart squeezed looking at the even ugliest corners of my dusty and polluted city turned into fancy spots. Still dusty, and polluted, but fancy. 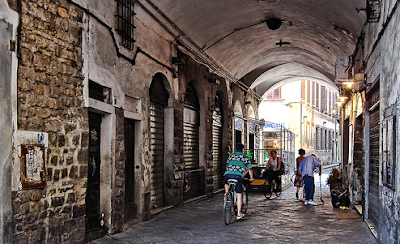 One morning I paid a visit to the old trade district, where some wholesalers I know used to be. Now imagine a long, narrow street near the train station, one of those streets where it is impossible to take more than three steps in a row on the sidewalk because it's in pitiful conditions, so you walk a bit on the street, also in pitiful conditions, and then you hobble between the parked vehicles, the other people, and the continuous, noisy stream of cars, bikes, motorbikes... Fortunately, the bus changed its route! 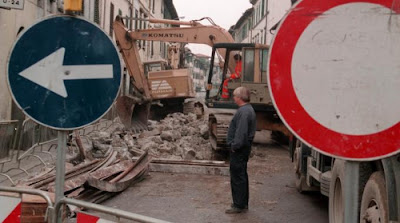 Image from 055Firenze.
That street has been forever home to every kind of humanity and trades, so no surprises there. I got almost relieved. But then...The first thing "off" I noticed: the silence. Normally people would talk and yell and swear. We're in Italy, after all. But no one was yelling. My naive explanation was they must be all foreigners. There's no point in yelling if no one understands you. 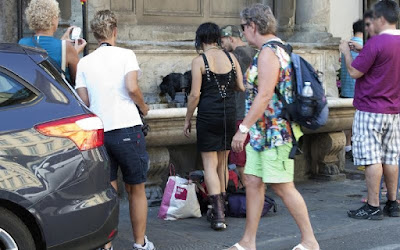 I walked up and down the street a few times only to realise no more than two shops I knew had survived. All entrances on the street have changed. Food and drinks everywhere. Even the dark holes that used to smell like sewer had got its cheap surgery, and looked cool. Well, the smell is still there.

I saw hipsters drinking pints of craft beers. My first thought was they were models paid by the pub owners to get people inside. We are so smart! I mean, who'd drink craft beer in a pint, at 11 am, during a heat wave in city center? 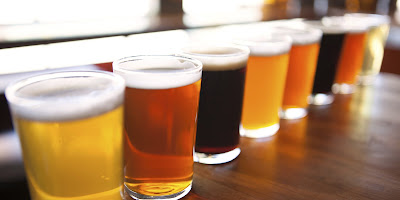 Image from Craft Beer and Kitchen

Of course my wholesalers weren't there anymore. They left their modest spaces to retail shops selling all the same stuff. How do those shops even survive? I imposed myself not to be so suspicious. I mean, things change, it is a good thing! 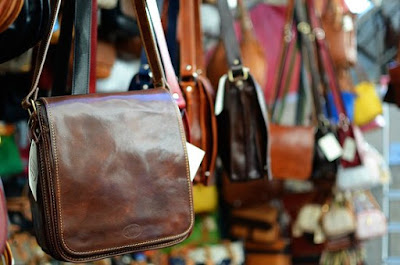 Being surrounded by shops, I obviously tried some shopping. I asked the price of a small bag and the guy answered: 450 euro. That would be half a monthly rent for an apartment ("Ah, that's how you survive! Brilliant!"). Probably change isn't for me, though. 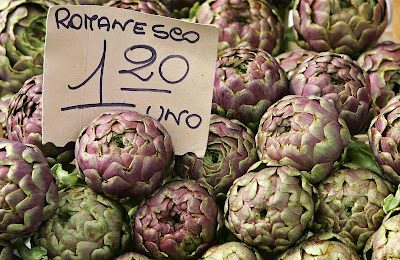 After the bag episode, I opted for the new, shiny Feltrinelli bookshop that opened inside central station. I consider it a major improvement! As I entered, I thought I got it wrong - did I step inside MacDonald?! Then I had to remember that bookshops won't survive by themselves any longer. People doesn't want to read, they want to be entertained. So the new formula for selling books in Italy is to join forces with a barman. It's so darn complicated! 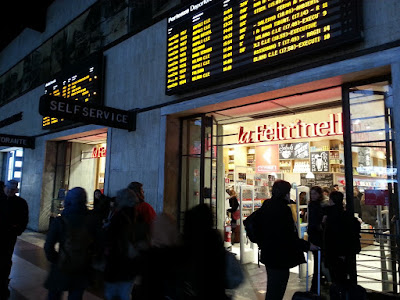 Anyway, I was determined to buy some books, so I carved my way through the line at the till, and reached the bookshelves behind. It is a nice, enormous bookstore. Unfortunately, I couldn't browse into the A-H section because a bunch of tourists, clearly devastated by the heat wave, were sitting on their luggages and wouldn't move. "This is what happens if you drink craft beer in the morning during a heat wave", I thought. I tried timidly to approach the shelves, but they gave me that desperate look ("Please don't ask us to stand, our feet sore"). The clerk saw it too, therefore tried to avoid any eye contact with me ("Please, my shift ends in 5"). So I passed the squatted shelves. After picking some books by authors whose names start with any letter between I and Z, I start wondering looking for a till. They seemed all closed. A clerk saw me looking around, so tried to avoid me ("They don't pay me enough for this!") as the one before. I respectfully left him alone. 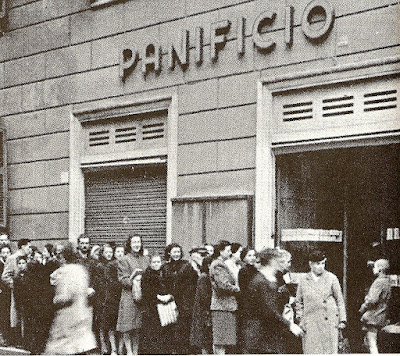 I lined myself in the long queue together with the Cafeteria's customers. It came to my mind that once you were not allowed into bookstores with drinks. I smiled. But after a few seconds, mood swing. I felt pretentious with my books. Like we were experiencing a famine, and we were in line for food stamps, and I was there with my stupid, inedible books. For a moment, I felt terrible.

Now let's talk about real improvement. Even in Florence, the city where you can't pee, and the restrooms are always mysteriously out of order, there are now public toilettes...Find the map here. For your treasure hunt. 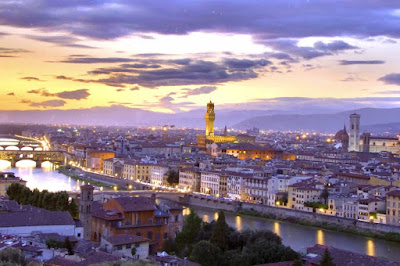 I came back a little disturbed, but also with great hopes for the future. After all, things may change!


Have a nice day!